The Beatles’ Yellow Submarine will be released as a limited edition, 7” vinyl single picture disc, as pictured above, on 6 July. It marks the 50th anniversary of the release of the celebrated animated film inspired by the John Lennon-Paul McCartney composition.

A digitally-remastered version of the film is returning to cinemas for the first time since 1999. Event-style 50th anniversary screenings will take place in July, with the film restored in 4K digital resolution by Paul Rutan Jr. and the team at Triage Motion Picture Services and Eque Inc. The film score has been remixed in 5.1 stereo surround sound at Abbey Road Studios by Peter Cobbin.


The vinyl picture disc will be housed in a card sleeve with a die-cut hole on the front to show the disc. The single will feature its fellow Revolver track ‘Eleanor Rigby’ on the flip side, just as the original Beatles single did when it first appeared in August 1966.

The original single hit No. 1 in the UK and in numerous countries around the world including Australia, Germany, Holland and across Scandinavia. In the US, it peaked at No. 2, held off the top spot in September 1966 by the Supremes’ ‘You Can’t Hurry Love.’

During Parlophone’s UK reissue campaign of the 1980s, in which each Beatles single was re-released in picture sleeve and picture disc versions to mark 20 years since their first release, ‘Yellow Submarine’ peaked at No.63 in the British chart.

The sound effects used on the ‘Yellow Submarine’ came mainly from oddments in a cupboard storage area at Studio Two of Abbey Road. Lennon even blew bubbles into a bucket for one effect, and the recording featured Brian Jones of the Rolling Stones chinking glasses. Backing vocalists included Marianne Faithfull, Pattie Harrison and Beatles insiders George Martin, Neil Aspinall and Mal Evans.

Shop The Beatles’ Yellow Submarine in the MusicVaultz store: 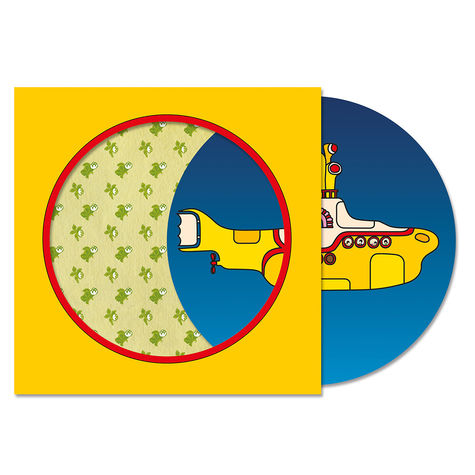 In this article: Rock, the beatles